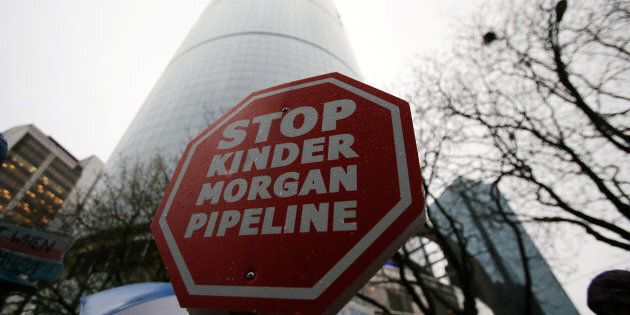 Taken together, the Liberals’ approach to each of these items demonstrate that their mindset rests with yesterday’s resource-based economy.
By Will Dubitsky, Contributor
Retired, worked for several Government of Canada ministries on sustainable development policies, legislation, programs, projects and other related initiatives.
04/24/2018 02:04pm EDT | Updated April 24, 2018

Prime Minister Justin Trudeau has once more taken the international stage in April 2018, before the Assemblée nationale in France and in a discussion with British Prime Minister Theresa May to exhibit his leadership on climate change. But his leadership on climate is much like his “Canada is back” on international affairs — incoherent and empty, and more concerned with image and opinion polls, as per the description in a recent book by a former Liberal insider Jocelyn Coulon.

Trudeau’s aggressive stance on the Trans Mountain Pipeline to respond to Kinder Morgan’s threat to pull the plug on the pipeline if the B.C.-Alberta dispute is not resolved by the end of May 2018, together with the greenwashing of Bill C-69 currently before the House, are most telling. These elements are consistent with the Trudeau administration’s absence of substance on addressing climate change.

Trudeau is totally out of step with global migration to a green economy, with China and Europe in particular.

His justification that Canada can develop the economy while protecting the environment shows he just doesn’t get it.

In trying to resolve the B.C.-Alberta dispute on the Trans Mountain Pipeline, Trudeau has defined his priorities by implying he is ready to finance a partnership or an outright purchase, vowing the “pipeline will be built” in line with “national interests” and referencing that the federal government has full authority to make this happen. His justification that Canada can develop the economy while protecting the environment shows he just doesn’t get it. A migration to a green economy implies economic development and sustainable development becoming one and the same, with the green economy offering six to eight times more jobs per unit of government investment than the resource-based economy.

Government investment in the pipeline would be tantamount to a gift to Kinder Morgan in light of the uncertainty of global markets for tar sands-derived fuel, specifically the implications of the U.S. oil supply glut and the Chinese and European initiatives to accelerate the arrival of peak oil demand. And the International Monetary Fund estimates that in 2015 U.S. dollars, Canada already subsidizes fossil fuels to the tune of $46B per year when health and climate considerations are factored in. So much for Trudeau’s commitment to end fossil fuel subsidies.

Even the optimistic view in Budget 2018 that Canadian oil production would reach to 5.4M barrels per day by 2030 doesn’t support the case for Trans Mountain in that the combined capacity of the Trans Mountain Pipeline, the Enbridge Line 3 replacement and Keystone XL is 7.6M barrels per day. The Economist concurs that Kinder Morgan is a flop. Exactly how excess pipeline capacity would contribute to higher prices for Canadian oil, as per the argument of the industry lobby, is quite fuzzy.

Bill C-69 preserves the priority of the Stephen Harper government for the tar sands while creating an illusion of concern for the environment.

As well, the reality is that a change in ownership would not halt the court challenges, whether they stem from government of B.C., the City of Burnaby, First Nations groups and/or other B.C. stakeholders. The First Nations court challenges constitute a rocky road for the Trudeau administration. Now there is a new factor in favour of First Nations, which is that the current administration has signed the UN Declaration of the Rights of Indigenous Peoples (UNDRIP), but it is not applying UNDRIP to pipelines.

Bill C-69, concerning water, environment and energy, confirms Trudeau’s true colours on tar sands and pipelines. It calls for the creation of a new Impact Assessment Agency of Canada to review all environmental elements associated with major projects such as pipelines, but only intervenes at government discretion for projects of “significant risks.”

For such projects, a government-appointed panel of experts would be responsible for a more thorough review. Should the Trudeau administration disagree with a panel’s recommendations, it can override the recommendation in the name of the “national interest.” The newly created and industry-friendly Canada Energy Regulator, the replacement for the National Energy Board, would participate in the deliberations on pipeline impact assessments. Thus, Bill C-69 preserves the priority of the Stephen Harper government for the tar sands while creating an illusion of concern for the environment.

Worse still, Bill C-69 excludes in-situ tar sands projects that account for the majority of tar sands initiatives, from the need to be subject to environmental impact exigencies. In-situ extraction entails injecting steam underground to soften the bitumen for easier pumping to the surface. Natural gas is the energy source for this method this, resulting in more emissions per barrel than open-pit mining.

Not to worry, we are told by Trudeau, because Alberta has established an emissions limit on petroleum development in the tar sands at 100 mega tonnes/year. However, that cap on carbon emissions/year represents a 40 per cent increase in emissions.

Bill C-69 is also designed to give the impression that one is putting back into the Navigation Waters Protection Act what the Conservatives removed regarding environment impact requirements for new infrastructure projects transgressing waterways, such as pipelines. Yet Minister of Environment and Climate Change Catherine McKenna claims that the Kinder Morgan pipeline would have been approved under the new legislation. That’s because Bill C-69 does not add any new waterways to the Conservative short list of protected water bodies. So, what has changed? And the bill leaves intact the authority of offshore petroleum boards such as that created under the Canada-Nova Scotia Offshore Petroleum Resources Accord Implementation Act.

All of these Canadian eggs in the same basket for a world that would be very different by the time any one of the approved and proposed pipelines would be completed. Two-hundred fifty international scientists have warned Trudeau of his poor priorities.

Taken together — Bill C-69 “prioritizing” the environment while re-affirming the status quo, the aggressive position on tar sands development, plus the absence of any comprehensive plan to make the transition to a green economy — demonstrate that the current government’s mindset rests with yesterday’s resource-based economy.

Equally important, the Trudeau administration is clueless on how China, the world’s largest energy consumer and vehicle market, is already changing global paradigms at a speed and intensity greater than the industrial revolution.