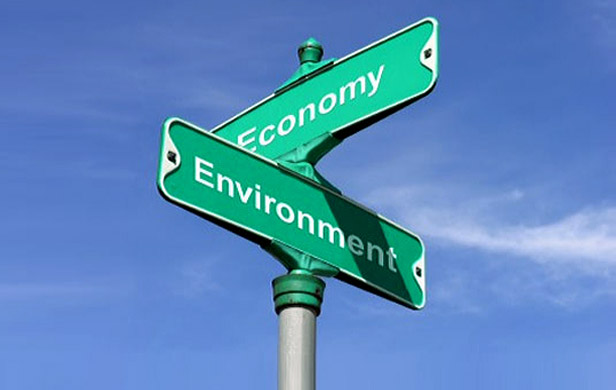 There are those like Stephen Harper who repeatedly say we must choose between economic development and sustainable development.

And there are those who, concerned about the environment and the latest reports from the International Panel on Climate Change, suggest that economic development and sustainable development should be reconciled.  Countries such as Germany are often cited as cases in point.  Most environmental organizations fall into this latter reconciliation category.

That said, the term reconciliation seems totally out of place when one considers that the green sectors are among the fastest growing and highest job creation sectors of our times and that this growth can only get better as nations adopt more aggressive approaches to fully participate in the new economy.  Moreover, what especially makes this growth attractive is that the green economy is every bit as diversified, if not more so, as Canada’s traditional natural resource-based economy.

Accordingly, rather than the reconciliation of opposing forces, we should be talking about the green economy as the prime focus of Finance, Economic Development and Treasury ministers, supported by a minister responsible for the green economy.  If this “attitude” was to be adopted in Canada, we would be assured of significant progress towards synergistic economic and sustainable development objectives.

There are 3.5 million green jobs in the EU and 1.2 million EU jobs in renewables.  Germany’s renewable energy sector alone boasts 382,000 jobs, making it among the largest in that country.

Renewable job growth is so strong, Europe’s  wind sector faces a shortage of about 7000 positions/year.

China also added 12 GW of solar capacity in 2013.  Currently, there are 300,000 jobs in China’s solar photovoltaic domain and another 800,000 in Chinese solar heating and cooling.

Of course, there is much more to the green economy than just clean energy.  The green economy is also about technologies to reduce waste and therefore improve business profits over the long run.  This includes technologies aimed at reducing pollution, toxic by-products, and above all, those technologies which reduce the production of waste at the source, in the manufacturing  process.

Then there are the exceptional opportunities pertaining to the transportation sector. Being nearly entirely dependent on fossil fuels, transport must be seriously revamped.  The right legislative and fiscal frameworks for the auto sector would spur both innovation and new supply chain products and industries.

What is stopping us from working on these high job creation sustainable development solutions?

One of the greatest impediments to migrating away from the traditional economy rests with the fact that we continue subsidizing the problem, big time.  Indeed the fossil sectors are the world’s most subsidized.

According to the International Energy Agency, we are subsidizing greenhouse gases at the level of $110/ tonne.

Particularly telling is the data churned out by the International Monetary Fund (IMF) on 2011 fossil fuels direct subsidies, plus the costs of externalities – such as the impacts of climate change on infrastructure and pollution on health.  The IMF came up with a global total of $1.9 Trillion/year in subsidies and government costs associated with fossil fuels.  Among nations evaluated by the IMF, Canada shamefully ranked 14th in public subsidies for fossils at $26.4B/year.

Consequently, ending these subsidies would not only level the playing field for more equitable competition from clean technologies, but would also free up financial resources to support the shift to a green economy.

And the payoff is green jobs – lots of them.  That is, a green shift offers 6 to 8 times more jobs for a given unit of investment when compared with government investments in the fossil fuel economy.  To this effect, the BlueGreen Alliance published a report indicating that $1.3 billion in subsidies for the oil and gas sector supports just 2,300 Canadian jobs, while the same amount invested in the green economy would support 18,000 to 20,000 jobs.

Not only does the green economy give a better bang for government bucks, but a green economy is also very unlike a resource-based economy, which concentrates the wealth in the specific geographic areas where the fossil and natural resources are found.  This is to say that a green economy spreads the wealth opportunities all over the country and planet.

The production of clean energy, the manufacturing of clean technologies and the maintenance of clean tech systems can occur in most parts of Canada and around the globe.

Other sources of revenue for a green shift could include auctions of emission credits under a cap and trade scheme, and stiff, progressive penalties for non-compliance on environmental legislation.  Moreover, public banks and export corporations could play a major role in supporting the green economy as is the case in China, Germany, the UK, the EU and Brazil.

Finally, with respect to funding to support the transition to a green economy, it is important to note that both Harper and Trudeau support an exceptionally low corporate tax rate of 15%, a policy that has resulted in $575 billion lying dormant in corporate liquidity – a formula for austerity budgets.

In other words, with a higher corporate tax rate, there would be  plenty of money around to support a fast-forward catch-up to other nations regarding the green economy as well as improvements in job creation, health, child care, innovation and so on.

The main obstacles in the way to moving to a diversified, high-growth, high-job creation, green economy are our governments and political leaders – incapable of thinking outside of the box.

Indeed, both Stephen Harper and Justin Trudeau regard Canada as a natural resource/fossil fuel export economy and place an undue emphasis on tar sands exports, supporting pipelines and trade agreements.  Both seem oblivious to the fact that China and the EU have aggressive green economy policies, with objectives to reduce their dependency on fossil fuel imports.

To a lesser extent, the US has embarked on a similar path.

Both Trudeau and Harper also seem oblivious to the UN Conference on Trade and Development (UNCTAD) conclusion that, “apart from short-term price booms, the ‘terms of trade’ – the price of resource exports relative to manufactured goods – have been falling for more than a century.”  Suffice it to say, neither Harper or Trudeau is prepared for the emerging global green economy – the economy of tomorrow.

Finally, green advocates have got to get out of the paradigm of economic and sustainable development reconciliation and start talking about attractive, green economic development strategies.