Methane emissions are underrated at one third of global warming gases, largely because fossil fuel sector methane emissions are underestimated by 70 percent.  Current data indicates the energy sector accounts for 40 percent of man-made methane.  Consequently, the COP26 non-binding pledges of over 100 nations for a 30 percent reduction by 2030 are not only dreadfully inadequate, but also, without standardized measuring, reporting and verification standards, oil and gas industry methane greenwashing is rampant.  The draft European Union (EU) plan to reduce methane emissions up to 80 percent by 2030 and establish transparent extraterritorial norms will be complimented by an accelerated transition to clean energy independence to reduce reliance on Russia.  As well, existing technologies can capture fossil fuel methane for selling it for a net profit, meaning methane zero-tolerance is possible.  By contrast, Canada’s methane ambitions procrastinate and are fuzzy.

According to Carbon Tracker, methane emissions account for one-third of the global warming portrait since the pre-industrial era.  That makes it the second largest greenhouse gas (GHG) source.  The amount of this gas in the atmosphere has been steadily rising since 2007.

Yet the full picture is much worse.  An International Energy Agency (IEA) analysis made public on February 23, 2022, reveals that reports from governments underestimate global energy sector methane emissions by 70 percent.

Methane emanating from the fossil fuel sector is largely attributable to leaks from oil and gas pipelines and wells, in addition to fracking, venting and flaring.  These releases are readily avoidable at no net cost by applying a large array of existing technologies to capture methane.  There is no net cost for the capture because the market price of methane is greater than the cost of methane abatement.  In effect, reductions in oil and gas industry sources of methane emissions are low hanging fruits because methane related to agriculture and landfills are problematic.

The gross underestimation energy sector methane discharges indicates that the slight edge over agricultural sector responsibility for methane emissions may not be accurate.  Present data has fossil fuel originated methane very closely behind agriculture, at 40 percent.

Then there is the matter of potency.

Methane has a global warming impact 80 times greater than carbon dioxide in the first 20 years after released in the atmosphere, and then dissipates.  By comparison, CO2 emissions hang around in the skies much longer.

Not surprisingly, methane reduction targets are now in vogue.  But, fossil fuel industry greenwashing on methane reductions is facilitated by anarchy reigning on emissions measurements, reporting and verification.

This anarchy implies that methane targets may be nice for political appearances but are window-dressing if not accompanied with a combination of accountability standards along with compliance comprehensive policy and regulatory agendas.

Since energy sector methane emissions can be captured and sold for a net-profit, the IEA suggests that the oil and gas industry should shoot for methane zero-tolerance.

What’s more, the methane global consensus does not include binding agreements for individual countries.  It is just an agreement to commit to reduce methane GHGs.  Fifteen of the top 30 emitters, including Canada, signed the pact.  Russia and China did not sign.

The European Union (EU), stands apart with its proposed Methane Strategy to decrease methane emissions from the oil, gas and coal with a non-binding reduction target of 80 percent by 2030 (base year TBD) and a comprehensive draft action plan that covers imports and global transparency.   The EU draft has the makings of a world model.

The EU challenges are a tall order with more than 40 percent of its gas being methane heavy gas from Russia, representing greater emissions than coal.

The horrific barbaric colossal Russian invasion of Ukraine is already having an impact for the EU to accelerate its Fit for 55 plan to reduce GHGs by 55 percent based on 1990 levels and the 40 percent reduction in fossil fuel use by 2030.  This acceleration may be a precursor for global groundwork on how each nation and/or region achieves energy independence and addresses climate change concurrently, the solutions being the same.  The EU now has a working document to speed up a transition to renewables and biogas plus the manufacturing of clean energy technologies.  The German government has tabled legislation to advance its 100 percent renewables goal by 15 years, the new goal fixed for 2035.

Hence, in the medium term, solutions for both global energy security and combatting climate change, are the same.

The highly publicized pledges for methane emission reductions are often intentionally misleading, not only because of extraordinary underestimating.

That’s because the pledges from the public and private sectors do not adequately reflect that each greenhouse gas stays in the atmosphere for a different length of time.

The 20-year long high potency of methane can readily be statistically diluted by measuring methane’s climate impacts over a century.  If so measured, one tonne of methane has an atmospheric warming impact equivalent to 26 metric tonnes of CO2.  According to a Stanford University report, over a 20 year period, to comply with the Paris Agreement, methane GHG requirements should peg each tonne of methane as equivalent to 75 tonnes of CO2.

As one might expect, oil and gas companies tend to describe methane emissions over a 100-year time frame.  Without international reporting norms, industry disclosures and targets are suspect.

Methane emissions can be found over the entire oil and gas supply chain, including orphaned wells.

The purpose of venting upstream oil is to get rid of natural gas, an unwanted by-product.  This gas is occasionally burned off or flared, but the combustion rates are typically incomplete, around 92 percent.  The remaining 8 percent in CO2 equivalents ends up being as potent as the 92 percent combusted.

As for methane emissions from the gas value chain, they grossly exceed those of the oil sector.  Pipeline leaks are the main culprit due to faulty and deteriorating equipment.  The value chain also involves venting for pipeline maintenance.

First, Russia is among the largest emitters of methane due to leaks from its aging pipeline infrastructure, a 40 percent rise in methane escaping in 2020.

Second, the IEA assessment of leaks from fossil fuel pipelines are equivalent to how much gas in consumed by Europe annually.

Third, fugitive GHGs from Russian gas pipelines are worse for the environment than those of European coal use for which Russian gas is meant to serve as a solution.

Since shale gas is a prime feedstock for LNG facilities, should the US$1.3 trillion in global LNG infrastructure plans reach fruition, the emissions associated with fracking and LNG plants could surpass those of emissions from coal-fired plants under construction and in pre-construction planning.

The greatest methane wild card is the pending impact on the melting of permafrost, there being inestimable humongous amounts of methane being below the permafrost.  With the Arctic region warming twice as fast as the global average, arctic ice sheet and permafrost melting will compound global climate impacts by releasing more CO2 and methane, while increasing ocean temperatures.  The costs of global warming stemming from this could be in the order of US$70 trillion.

The December 2021 European Commission draft regulatory proposals to achieve up to an 80 percent methane GHG cutback entails a long list of measures.  Some of these measures are setting standards for measurement, reporting and verification; requiring companies to measure and quantify asset-level methane at the source; performing extensive surveys to detect and repair methane leaks; banning venting and flaring, except in specific circumstances; and obligating Member States to have methane mitigation plans that encompass abandoned and inactive wells.

To integrate responsibilities for methane emissions associated with fossil fuel imports and concurrently foster a global methane climate agenda, the measures comprise saddling EU companies importing fossil fuels to provide reliable methane data from their respective suppliers; plus details on how the suppliers mitigate their emissions.

Especially important, the Commission’s proposals take aim at establishing standardized global transparency rules indicating the performance and reduction efforts of countries and fossil fuel companies;  a public transparency data base comprising data from operators and importers; and a global monitoring tool to identify methane hot spots, within and outside the EU.

As well, the proposed EU plan calls for a review of methane measures in 2025 with an objective to migrate to stricter requirements for fossil fuel imports.

Another tool to establish consistency on methane emission reporting is one conceived by the Intergovernmental Panel on Climate Change (IPCC), the UN backbone on climate research and action. The IPCC has come up with the Global Warming Potential (GWP) mechanism.  GWP addresses the climate impact differences between various greenhouse gases and CO2.  Accordingly, GWP, zeros in on underestimates of methane atmospheric consequences and is becoming a standard for government and corporate policies.  It is especially handy for the global trading of carbon credits.

That said, there is a case for using GWP for setting different climate targets for the different types of GHG emissions.  This is within the realm of the possible since satellites can identify and measure most methane origins.  Notwithstanding, while satellite technologies continue to improve, they still cannot detect methane from equatorial, offshore and northern areas.

With respect to the private sector,, some oil and gas companies have joined the voluntary World Bank Zero Routine Flaring by 2050 initiative.  Of course, it is perilous to put one’s faith in voluntary agendas.  Nevertheless, Shell has indicated it will end routine flaring by 2025.

In Canada, methane upstream supply chain emissions are not covered by the Greenhouse Gas Pollution Pricing Act for which the federal authority was confirmed on March 25, 2021 by the Supreme Court of Canada.  The Act establishes a carbon pricing system for those provinces and territories that do not have their own comparable system.

Sadly, the Trudeau administration new green deal announced December 11, 2020, procrastinates on methane.  The methane regulations will not come into effect until 2025.  Canada had a methane emission reduction agreement with the Obama administration to become effective beginning 2020.  Canada dropped the ball when Trump took over.

Where the light gets in

There is “crack in everything, that’s how the light gets in.” – Leonard Cohen

That light filters in through two cracks.

First, not only are the EU methane targets ambitious, but also there are reasons for optimism with the European Parliament and EU Member States adopting variations of the Commission’s standardized extraterritorial methane divulgation proposals and remedial measures.  And the Russia-Ukraine war is expediting an EU green economy transition that might serve as a model for the world to address climate change.

On international norms, ditto for the IPCC’s GWP.

Assessment tools such as these are essential for methane policy and regulatory action.

These cracks are where the light is filtering in.

And Canada can do better. 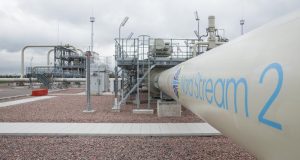 Will Dubitsky - April 26, 2022 1
Putin's war has created an electroshock for Europe because it depends on fossil fuel imports for 60% of its energy, one-third of which comes...