As much as China is tragically disgraceful on human rights, be it with the Ouighour and Tibetan genocides, plus those who “embarrass” the state, China is leading the global paradigms gamechanger in favour of a green economy at lightning speed.

Indeed, as this article will illustrate, China is several years ahead of other developed countries.

Howbeit, China being in a transition mode, the old economy business activity continues with immense orders of magnitude because shifting paradigms is not like turning on and off a light switch.

Even so, China’s climate action is so pervasive, that the public and private sectors in all other developed countries will have to adapt their economic, energy, transportation and other paradigms to compete with China.

However, persisting is the often-used feedback of cynics that China must act first since China is the world’s largest emitter.  That’s an often-used narrative to deflect national and/or personal responsibility.

On clean energy, by the end of 2021, the year’s newly installed solar and wind capacity amounted to 100 gigawatts (GW).  More than half of the 2021 global wind installations were in China.  Solar capacity additions in 2022 may goes as high as 75 GW to 90 GW.  These numbers are spellbinding considering that the entire production capacity of Hydro-Québec is 47.5 GW.

The 2021 wind and solar augmentations brought the China-wide total from these sources to 635 GW, or 26.7% of China’s total electric generation capacity.  That’s pretty good considering back in 2011, coal accounted for 81% of the national power supply.

Largely due to China’s humongous renewables rate of expansion, the costs of solar and wind are among the least expensive sources for new electrical power installations around the world.  This is exemplified by 81% of the 2021 global new electrical power generating capacity being powered by renewables, reflecting an average annual growth rate of 15% from 2011 to 2021.  Through to 2026, renewables will reach 95% of the international new power proportion.  Solar and wind obtained 88% of the 2021 renewables market share.

China is the principal actor behind the rapidly increasing migration towards electric vehicles by nearly all, if not all, global vehicle manufacturers.

Though Tesla remains the most well-known electric vehicle (EV) brand, it is too “small” a competitor to transform the vehicle industry at-large.

It is the vehicle legislation in the European Union and China that obligated global vehicle manufacturers to invest hundreds of billions of dollars to re-invent vehicles from the ground up, scrapping a century of incremental improvements in the internal combustion engine vehicle (ICEV).

Because the automakers are global companies competing with each other in all critical markets, the impacts of the legislation initiatives in these two jurisdictions are global.

That said, China has set itself apart in the industry transformation with a long global lead, up to 5 years ahead, of the North American-based industry.

The EV sector China business intensity is twice that of, and growing 4 times faster than, the U.S.  In the 2021, 3.3 million EVs were sold in the China, and in 2022, up to April, EVs were 22% of all new of its passenger vehicle sales.

It may be construed, China has greater leverage to influence the vehicle industry.  With a vehicle market 1.7 times larger than the U.S., few automakers can mess with China.  China represents 40% of Volkswagen and 50% of BMW global sales.  GM sells more vehicles in China than in the US.

Notwithstanding, China’s EV edge is much more than about market size.  This edge includes EV research dating back to the 1990s and early 2000s, before government policy initiatives began, over 400 EV tech manufacturers, and “Made in China” battery requirements for all EVs sold in the country.

By early 2022, China accounted for 80 percent of global battery production capacity, in part thanks to government financial and industrial policy support.

Today, China has 125 EV battery plants in business.  That’s 10 times the number of European and North American facilities combined.  Battery production sites planned and under construction in China will double current the nation’s Gigafactories.  It is expected that China will reach 3733 gigawatt hours (GWh) of lithium battery cell capacity by 2031, more than double the capacity in the rest of the world by then.

And China currently has 50% of the world’s lithium processing plants.

On battery raw materials, China has 10% of the global inventory of lithium, while Australia has 50%.  Consequently, China has supply agreements with Australian interests.

Accordingly, the economies of scale of China’s battery manufacturing wherewithal both implies capability to accommodate large orders and keep purchase prices down for enormous quantities of lithium, cobalt, graphite and other materials.

China’s Contemporary Amperex Technology Ltd. (CATL), the world’s largest battery manufacturer, is one of the prominent public companies in the world, outperforming Google, Tesla and Facebook.  Its newest factory began production in December 2021 with an annual production capacity of 120 GWh, enough to power 1.2 million EVs.  No doubt, being the battery supplier of Tesla, BMW, Daimler, Volkswagen as well as China’s major EV companies such as Xpeng and NIO and other China-based EV manufacturers, catapulted CATL to the stratosphere.

CATL outperforms global dominant EV battery stakeholders such as LG Energy Solution and Panasonic while serving 30% of the global market and half of China’s market.  In 2021, CATL had US$12B in investments planned up to 2025 across the globe.

CATL is now looking for a North American site for a US$5 billion battery plant  with an annual capacity of 80 GWh.  Geopolitics, in the form of U.S. discomfort with major investments by Chinese companies, has CATL considering Ciudad Juarez or Saltillo, Mexico, near the border with New Mexico, not far from the Tesla Gigafactory under construction in Austin, Texas.

One other major league battery stakeholder, LG Energy Solution plans to double its battery cell production capacity in China to respond to the Made in China battery stipulations for all EVs delivered to China.  That encompasses the needs of Tesla’s Shanghai factory.

Tesla, after starting production in 2019 at its first China plant, in Shanghai, with an annual capacity to turn out 450,000 vehicles, is not only expanding this plant, but Tesla also has plans for a second factory with an output of another 450,000 vehicles per year.  Once the new construction projects are completed, Tesla’s yearly China production could hit 7 digits.

Volkswagen has 3 EV plants in China.

BAIC, the largest automaker in China, will be phasing out gasoline vehicles in 2025.

So far in 2022, China’s BYD is tied with Tesla for numbers of EVs sold, but that includes plug-in hybrids.  Today, four of the top 10 vehicles sold in China — all categories — are BYD all-electric models.  That should bring the cumulative total of BYD plug-in sales to 3 million by the end of 2022.

Beyond China, BYD has tentacles in North America with a bus and truck plant in Lancaster, California and a bus plant in Newmarket, Ontario.

A further BYD note, is it is another among China’s major battery producers.

NIO, a China start-up all electric vehicle manufacturer which began production in May 2018, achieved cumulative sales of 200,000 units by April 2022.  NIO now has its sights on the global markets.  By the end of 2022, the company will be present in some European countries.  Also in 2022, NIO signed a 10-year lease for its 200,000 square feet U.S. headquarters in San Jose, California.  The NIO target for 2025 is to be present in 25 countries and regions.

Another all-electric start-up in China which began production in 2018, is Xpeng.  It too reached a 200,000 in cumulative sales recently.  The company is well financed including Xiaomi, Alibaba, and Foxconn.  Despite its short existence, Xpeng is currently expanding to include Europe.

The preceding is in addition to the more than the 2019 total of 421,000 buses on the roads China, or 99% of the world total.  When the latest figures are available, there will be a dazzling increase because every 5 weeks, China adds 9,500 more buses to the country’s fleet.

Even U.S. President Biden acknowledged the EV headway of China, suggesting that China has an existing capability to pursue four times the global market share compared to U.S. potential.

Only 9% of plastics are recycled and plastic production consumes 10% of petroleum.  Because plastics are ubiquitous and are produced with “infinitely” different compositions, there are no quick fixes.

China has recognized this.  Hence, China has engaged in an incremental, step-by-step, process to set up a plastic management system to regulate all types of plastics with a focus that includes production, distribution, consumption, disposal/collection, recycling and the advancement of alternative products.  By 2025, China expects to reduce single-use plastic by 30%.

At least 75% of the country’s passenger and freight trains are electric.

China is the world’s largest importer of LNG, importing 109.5 billion cubic metres in 2021. That’s 1.3 billion more than Europe.  Amazing, since China did not begin importing LNG until 2006.

China will spend US$1.6-1.9 trillion on a second pipeline in line with a 30-year contract to import more gas from Russia, beginning its deliveries in 2 to 3 years.  This will surely amplify China’s status as the world’s largest booster of the growth of LNG imports, contradicting the green transformation.

China has bought into the idea that gas is a bridge fuel.  That is a false notion because extraction/production upstream gas emissions, especially if the source is shale gas, can render gas as bad as coal.  And the 40-60 year lifecycle of an LNG plant considerably delays the switch to renewables.

Coexisting with the China’s energy darks side is the revival of coal undermining the great strides achieved by China to reduce the coal share in power production.  This is a reflection of insufficient grid capacity to accommodate gargantuan expansion of renewables capacity, power outages, maintaining economic growth as the world’s manufacturing hub, reducing coal imports and lessening the impacts of high fuel prices.

For the nation, coal remains a good backstop for the present turmoil in energy economics, particularly because China extracts half of global mined coal.

Despite these astronomical old economy anomalies, China’s humongous concurrent actions on climate change compels the world to compete on the green transformation.  Sadly, this international competition may be a stronger motivator for other nations than the climate crisis.  That’s reality too!

While China cannot shut down the momentum of its fossil sectors immediately and it requires time to knock down cumulative emissions stemming from the past, there are clear indicators that China’s status as the number one emitter is dramatically changing.

China leads the world by far in private investments in the green economy and is home to the largest issuing of green bonds, green loans and other forms of green financial support.

China’s central bank, the People’s Bank of China, is simultaneously backing the financial makeover and has produced guidelines on environmental accountability for financial institutions.

One benchmark of China’s environmental progress to-date, is the China world record for an expeditious reduction of air pollution particulate matter, having declined 40% in the 7 years between 2013 and 2020.  The global impact of this achievement is a reduction in worldwide air pollution even when taking into account the increases in air pollution in developing economies in the South, Southeast Asia and Central Africa.

What China accomplished on air pollution in these 7 years is equivalent to what the U.S. took 3 decades to achieve, ever since the enactment of the U.S. Clean Air Act.  That’s an extraordinary feat.

Where a country is headed counts more than where it was

Regardless of all political and social considerations, climate and environmental solutions are universal.

China is defining global green economics, undeterred by inconsistencies.  Other countries must fall in line. 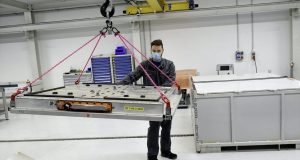